Due to the COVID-19 situation worldwide, they may be a delay in delivery. Thank you for your kind understanding.

Free Shipping with US$100 min spend on selected bestsellers. 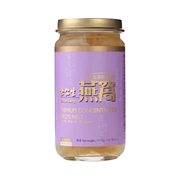